Nintendo 64DD was an add-on for the Nintendo 64 released by Nintendo in 1999. The add-on was short lived, and didn't have many games for it. It was discontinued in early 2001. 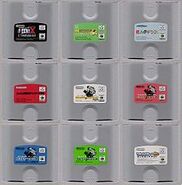 All the games released for the N64DD. They are extremely rare.

Retrieved from "https://cancelled-games-and-consoles.fandom.com/wiki/List_of_canceled_games_for_Nintendo_64DD?oldid=4319"
Community content is available under CC-BY-SA unless otherwise noted.